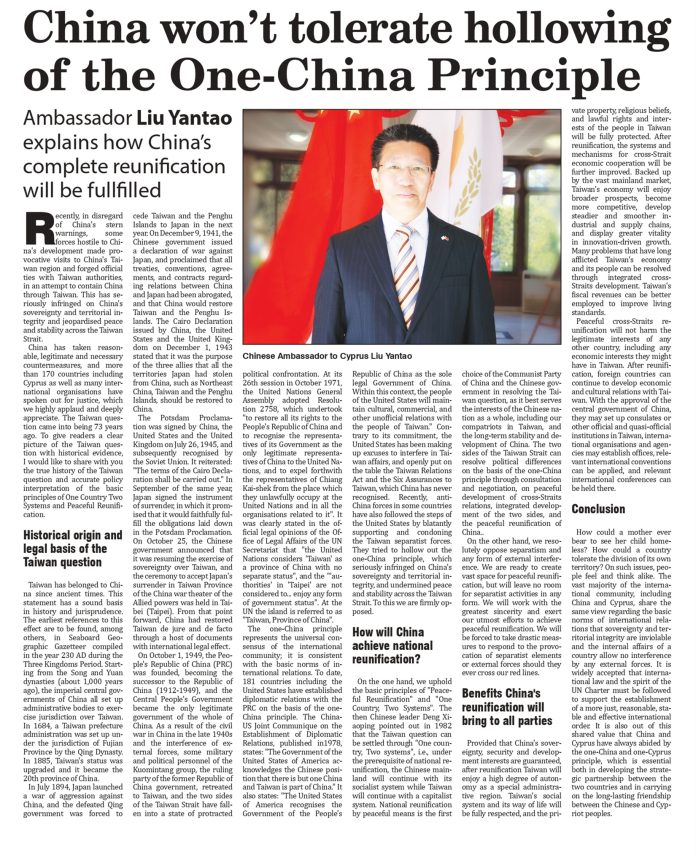 On September 17, 2022, Cyprus’ largest English newspaper Cyprus Mail published Ambassador Liu Yantao’s article entitled “China Will Not Tolerate Hollowing of the One-China Principle - China’s Complete Reunification Will Be Fulfilled”. The article offers a recount of the history and legal basis of the Taiwan question, a detailed elaboration on China’s basic principles of “Peaceful Reunification” and “One Country, Two Systems”, and an in-depth look into the benefits China’s complete reunification will bring to all parties. The full text is as follows:

China Will Not Tolerate Hollowing of the One-China Principle –

China’s Complete Reunification Will Be Fullfilled

Recently, in disregard of China’s stern warnings, some forces hostile to China’s development made provocative visits to China’s Taiwan region and forged official ties with Taiwan authorities, out of the attempt to contain China through Taiwan. This has seriously infringed on China’s sovereignty and territorial integrity and jeopardized peace and stability across the Taiwan Strait. China has taken reasonable, legitimate and necessary countermeasures, and more than 170 countries including Cyprus as well as many international organizations have spoken out for justice, which we highly applaud and deeply appreciate. The Taiwan question came into being 73 years ago. To give readers a clear picture of the Taiwan question with historical evidence, I would like to share with you the true history of the Taiwan question and accurate policy interpretation of the basic principles of One Country Two Systems and Peaceful Reunification.

What is the historical origin and legal basis of the Taiwan question?

Taiwan has belonged to China since ancient times. This statement has a sound basis in history and jurisprudence. The earliest references to this effect are to be found, among others, in Seaboard Geographic Gazetteer compiled in the year 230 A.D. during the Three Kingdoms Period. Starting from the Song and Yuan dynasties (about 1,000 years ago), the imperial central governments of China all set up administrative bodies to exercise jurisdiction over Taiwan. In 1684, a Taiwan prefecture administration was set up under the jurisdiction of Fujian Province by the Qing Dynasty. In 1885, Taiwan’s status was upgraded and it became the 20th province of China.

In July 1894, Japan launched a war of aggression against China, and the defeated Qing government was forced to cede Taiwan and the Penghu Islands to Japan in the next year. On December 9, 1941, the Chinese government issued a declaration of war against Japan, and proclaimed that all treaties, conventions, agreements, and contracts regarding relations between China and Japan had been abrogated, and that China would restore Taiwan and the Penghu Islands. The Cairo Declaration issued by China, the United States and the United Kingdom on December 1, 1943 stated that it was the purpose of the three allies that all the territories Japan had stolen from China, such as Northeast China, Taiwan and the Penghu Islands, should be restored to China. The Potsdam Proclamation was signed by China, the United States and the United Kingdom on July 26, 1945, and subsequently recognized by the Soviet Union. It reiterated: “The terms of the Cairo Declaration shall be carried out.” In September of the same year, Japan signed the instrument of surrender, in which it promised that it would faithfully fulfill the obligations laid down in the Potsdam Proclamation. On October 25, the Chinese government announced that it was resuming the exercise of sovereignty over Taiwan, and the ceremony to accept Japan’s surrender in Taiwan Province of the China war theater of the Allied powers was held in Taibei (Taipei). From that point forward, China had restored Taiwan de jure and de facto through a host of documents with international legal effect.

On October 1, 1949, the People’s Republic of China (PRC) was founded, becoming the successor to the Republic of China (1912-1949), and the Central People’s Government became the only legitimate government of the whole of China. As a result of the civil war in China in the late 1940s and the interference of external forces, some military and political personnel of the Kuomintang group, the ruling party of the former Republic of China government, retreated to Taiwan, and the two sides of the Taiwan Strait have fallen into a state of protracted political confrontation. At its 26th session in October 1971, the United Nations General Assembly adopted Resolution 2758, which undertook “to restore all its rights to the People’s Republic of China and to recognize the representatives of its Government as the only legitimate representatives of China to the United Nations, and to expel forthwith the representatives of Chiang Kai-shek from the place which they unlawfully occupy at the United Nations and in all the organizations related to it”. It was clearly stated in the official legal opinions of the Office of Legal Affairs of the UN Secretariat that “the United Nations considers ‘Taiwan’ as a province of China with no separate status”, and the “‘authorities’ in ‘Taipei’ are not considered to… enjoy any form of government status”. At the UN the island is referred to as “Taiwan, Province of China”.

The one-China principle represents the universal consensus of the international community; it is consistent with the basic norms of international relations. To date, 181 countries including the United States have established diplomatic relations with the PRC on the basis of the one-China principle. The China-US Joint Communique on the Establishment of Diplomatic Relations, published in1978, states: “The Government of the United States of America acknowledges the Chinese position that there is but one China and Taiwan is part of China.” It also states: “The United States of America recognizes the Government of the People’s Republic of China as the sole legal Government of China. Within this context, the people of the United States will maintain cultural, commercial, and other unofficial relations with the people of Taiwan.” Contrary to its commitment, the United States has been making up excuses to interfere in Taiwan affairs, and openly put on the table the Taiwan Relations Act and the Six Assurances to Taiwan, which China has never recognized. Recently, anti-China forces in some countries have also followed the steps of the United States by blatantly supporting and condoning the Taiwan separatist forces. They tried to hollow out the one-China principle, which seriously infringed on China’s sovereignty and territorial integrity, and undermined peace and stability across the Taiwan Strait. To this we are firmly opposed.

How will China achieve national reunification?

On the one hand, we uphold the basic principles of “Peaceful Reunification” and “One Country, Two Systems”. The then Chinese leader Deng Xiaoping pointed out in 1982 that the Taiwan question can be settled through ”One country, Two systems”, i.e., under the prerequisite of national reunification, the Chinese mainland will continue with its socialist system while Taiwan will continue with a capitalist system. National reunification by peaceful means is the first choice of the Communist Party of China and the Chinese government in resolving the Taiwan question, as it best serves the interests of the Chinese nation as a whole, including our compatriots in Taiwan, and the long-term stability and development of China. The two sides of the Taiwan Strait can resolve political differences on the basis of the one-China principle through consultation and negotiation, on peaceful development of cross-Straits relations, integrated development of the two sides, and the peaceful reunification of China..

On the other hand, we resolutely oppose separatism and any form of external interference. We are ready to create vast space for peaceful reunification, but will leave no room for separatist activities in any form. We will work with the greatest sincerity and exert our utmost efforts to achieve peaceful reunification. We will be forced to take drastic measures to respond to the provocation of separatist elements or external forces should they ever cross our red lines.

What benefits will China’s complete reunification bring to all parties?

Provided that China’s sovereignty, security and development interests are guaranteed, after reunification Taiwan will enjoy a high degree of autonomy as a special administrative region. Taiwan’s social system and its way of life will be fully respected, and the private property, religious beliefs, and lawful rights and interests of the people in Taiwan will be fully protected. After reunification, the systems and mechanisms for cross-Strait economic cooperation will be further improved. Backed up by the vast mainland market, Taiwan’s economy will enjoy broader prospects, become more competitive, develop steadier and smoother industrial and supply chains, and display greater vitality in innovation-driven growth. Many problems that have long afflicted Taiwan’s economy and its people can be resolved through integrated cross-Straits development. Taiwan’s fiscal revenues can be better employed to improve living standards.

Peaceful cross-Straits reunification will not harm the legitimate interests of any other country, including any economic interests they might have in Taiwan. After reunification, foreign countries can continue to develop economic and cultural relations with Taiwan. With the approval of the central government of China, they may set up consulates or other official and quasi-official institutions in Taiwan, international organizations and agencies may establish offices, relevant international conventions can be applied, and relevant international conferences can be held there.

How could a mother ever bear to see her child homeless? How could a country tolerate the division of its own territory? On such issues, people feel and think alike. The vast majority of the international community, including China and Cyprus, share the same view regarding the basic norms of international relations that sovereignty and territorial integrity are inviolable and the internal affairs of a country allow no interference by any external forces. It is widely accepted that international law and the spirit of the UN Charter must be followed to support the establishment of a more just, reasonable, stable and effective international order. It is also out of this shared value that China and Cyprus have always abided by the one-China and one-Cyprus principle, which is essential both in developing the strategic partnership between the two countries and in carrying on the long-lasting friendship between the Chinese and Cypriot peoples.

Press Release by Embassy of China in Cyprus: Progress of China’s...