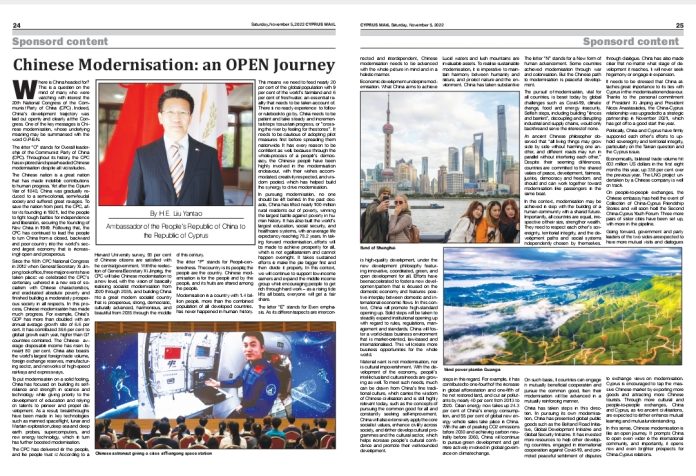 On 5 November, Cyprus’ largest English newspaper Cyprus Mail published Ambassador Liu Yantao’s article entitled “Chinese Modernization: an OPEN Journey”. It presents the key message of the 20th National Congress of the Communist Party of China, and elaborates on the rich meaning of Chinese Modernization. The full text is as follows:

Where is China headed for? This is a question on the mind of many who were watching with interest the 20th National Congress of the Communist Party of China (CPC). Indeed, China’s development trajectory was laid out openly and clearly at the Congress. One of the key messages is Chinese modernization, whose underlying meaning may be summarized with the word O-P-E-N.

The letter “O” stands for Overall leadership of the Communist Party of China (CPC). Throughout its history, the CPC has explored and spearheaded Chinese modernization despite all vicissitudes.

The Chinese nation is a great nation that has made indelible contributions to human progress. Yet after the Opium War of 1840, China was gradually reduced to a semi-colonial, semi-feudal society and suffered great ravages. To save the nation from peril, the CPC, after its founding in 1921, led the people to fight tough battles for independence and liberation, securing the founding of New China in 1949. Following that, the CPC has continued to lead the people to turn China from a closed, backward and poor country into the world’s second largest economy that is increasingly open and prosperous.

Since the 18th CPC National Congress in 2012 when General Secretary Xi Jinping took office, three major events have taken place: we celebrated the CPC’s centenary, ushered in a new era of socialism with Chinese characteristics, and eradicated absolute poverty and finished building a moderately prosperous society in all respects. In this process, Chinese modernization has made much progress. For example, China’s GDP has more than doubled with an annual average growth rate of 6.6%. It has contributed 38.6% to global growth each year, higher than G7 countries combined. The Chinese people’s average disposable income has risen by nearly 80%. China also boasts the world’s largest foreign trade volume, foreign exchange reserves, manufacturing sector, and networks of high-speed railways and expressways.

To put modernization on a solid footing, China has focused on building its self-reliance and strength in science and technology while giving priority to the development of education and relying on talents to pioneer and propel development. As a result, breakthroughs have been made in key technologies such as manned spaceflight, lunar and Martian exploration, deep sea and deep earth probes, supercomputers, and new energy technology, which in turn has further boosted modernization.

The CPC has delivered for the people, and the people trust it. According to a Harvard University survey, 93% of Chinese citizens are satisfied with the central government. With the reelection of General Secretary Xi Jinping, the CPC will take Chinese modernization to a new level, with the vision of basically realizing socialist modernization from 2020 through 2035, and building China into a great modern socialist country that is prosperous, strong, democratic, culturally advanced, harmonious, and beautiful from 2035 through the middle of this century.

The letter “P” stands for People-centeredness. The country is its people; the people are the country. Chinese modernization is for the people and by the people, and its fruits are shared among the people.

Modernization in a country with 1.4 billion people, more than the combined population of all developed countries, has never happened in human history. This means we need to feed nearly 20% of global population with 9% of the world’s farmland and 6% of freshwater, an essential reality that needs to be taken account of. There is no ready experience for follow or rulebook to go by. China needs to be patient and take steady and incremental steps to sustain progress, or “crossing the river by feeling for the stones”. It needs to be cautious by adopting pilot measures first before spreading them nationwide. It has every reason to be confident as well, because through whole-process people’s democracy, the Chinese people have been highly involved in the modernization endeavor, with their wishes accommodated, creativity respected, and wisdom pooled, which has helped build synergy to drive modernization.

In pursuing modernization, no one should be left behind. In the past decade, China has lifted nearly 100 million rural residents out of poverty, winning the largest battle against poverty in human history. It has also built the world’s largest education, social security, and healthcare systems, with an average life expectancy reaching 78.2 years. In taking forward modernization, efforts will be made to achieve prosperity for all, which is not egalitarianism and cannot happen overnight. It takes sustained efforts to make the pie bigger first and then divide it properly. In this context, we will continue to support low-income earners and expand the middle income group while encouraging people to get rich through hard work—as a rising tide lifts all boats, everyone will get a fair share.

The letter “E” stands for Even emphasis. As its different aspects are interconnected and interdependent, Chinese modernization needs to be advanced with the whole picture in mind and in a holistic manner.

Economic development underpins modernization. What China aims to achieve is high-quality development, under the new development philosophy featuring innovative, coordinated, green, and open development for all. Efforts have been accelerated to foster a new development pattern that is focused on the domestic economy and features positive interplay between domestic and international economic flows. In this context, China will promote high-standard opening up. Solid steps will be taken to steadily expand institutional opening up with regard to rules, regulations, management and standards. China will foster a world-class business environment that is market-oriented, law-based and internationalized. This will create more business opportunities for the whole world.

Material want is not modernization, nor is cultural impoverishment. With the development of the economy, people’s intellectual and cultural needs are growing as well. To meet such needs, much can be drawn from China’s fine traditional culture, which carries the wisdom of Chinese civilization and is still highly relevant today, such as the concepts of pursuing common good for all and constantly seeking self-improvement. China will also extensively apply the core socialist values, enhance civility across society, and further develop cultural programs and the cultural sector, which helps increase people’s cultural confidence and promote their well-rounded development.

Lucidwaters and lush mountains are invaluable assets. To realize sustainable modernization, it is imperative to maintain harmony between humanity and nature, and protect nature and the environment as we do to our own lives. China has taken substantive steps in this regard. For example, it has contributed to one-fourth of the increase in global afforestation and one-fifth of the net restored land, and cut air pollutants by nearly 40% from 2013 to 2020. Clean energy now takes up 24.3% of China’s energy consumption, and 55% of global new energy vehicle sales take place in China. With the aim of peaking CO2 emissions before 2030 and achieving carbon neutrality before 2060, China will continue to pursue green development and get more actively involved in global governance on climate change.

The letter “N” stands for New form of human advancement. Some countries achieved modernization through war and colonization. But the Chinese path to modernization is peaceful development.

The pursuit of modernization, vital for all countries, is beset today by global challenges such as COVID-19, climate change, food and energy insecurity. Selfish steps, including building “fences and barriers”, decoupling and disrupting industrial and supply chains, would only backfire and serve the interest of none.

An ancient Chinese philosopher observed that “all living things may grow side by side without harming one another, and different roads may run in parallel without interfering each other.” Despite their seeming differences, countries are committed to the shared values of peace, development, fairness, justice, democracy and freedom, and should and can work together toward modernization like passengers in the same boat.

In this context, modernization may be achieved in step with the building of a human community with a shared future. Importantly, all countries are equal, irrespective of their size, strength or wealth. They need to respect each other’s sovereignty, territorial integrity, and the development paths and social systems independently chosen by themselves. On such basis, if countries can engage in mutually beneficial cooperation and pursue the common good, then their modernization will be advanced in a mutually reinforcing manner.

China has taken steps in this direction. In pursuing its own modernization, China has presented global public goods such as the Belt and Road Initiative, Global Development Initiative and Global Security Initiative. It has invested more resources to help other developing countries, engaged in international cooperation against COVID-19, and promoted peaceful settlement of disputes through dialogue. China has also made clear that no matter what stage of development it reaches, it will never seek hegemony or engage in expansion.

It needs to be stressed that China attaches great importance to its ties with Cyprus in the modernization endeavor. Thanks to the personal commitment of President Xi Jinping and President Nicos Anastasiades, the China-Cyprus relationship was upgraded to a strategic partnership in November 2021, which has got off to a good start this year.

Politically, China and Cyprus have firmly supported each other’s efforts to uphold sovereignty and territorial integrity, particularly on the Taiwan question and the Cyprus issue.

Economically, bilateral trade volume hit 603 million US dollars in the first eight months this year, up 33.8% over the previous year. The LNG project undertaken by a Chinese company is well on track.

On people-to-people exchanges, the Chinese embassy has held the event of Collection of China-Cyprus Friendship Stories and will soon hold the Second China-Cyprus Youth Forum. Three more pairs of sister cities have been set up, with more in the pipeline.

Going forward, government and party leaders of the two sides are expected to have more mutual visits and dialogues to exchange views on modernization. Cyprus is encouraged to tap the massive Chinese market by exporting more goods and attracting more Chinese tourists. Through more cultural and people-to-people exchanges, China and Cyprus, as two ancient civilizations, are expected to further enhance mutual learning and mutual understanding.

In this sense, Chinese modernization is like an open journey. It prompts China to open even wider to the international community, and importantly, it opens new and even brighter prospects for China-Cyprus relations.