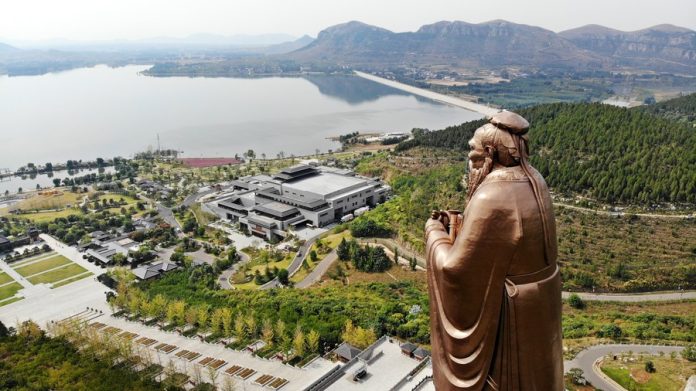 JINAN, Sept. 29 (Xinhua) — When the world is living through profound changes and a pandemic both unseen in a century, accompanied by geopolitical tensions, there is a common call for a dialogue among different civilizations to seek a better future for humanity.

The Eighth Nishan Forum on World Civilizations, which took place from Monday to Wednesday in Qufu, the birthplace of Confucius (551 B.C.-479 B.C.), east China’s Shandong Province, provided a platform for such a dialogue.

Themed “Diversity of human civilizations and common values of mankind,” the forum saw over 600 participants join online and offline to share views on the thoughts of the ancient Chinese sage, thus shedding light upon possible solutions to the most pressing challenges of the times.

As recorded in The Analects of Confucius, “Youzi said, ‘Make harmony a top priority in the application of rites. That was a key feature of governance by sovereign rulers in the ancient past. Always act upon the rule of harmony, no matter whether the issue at hand is minor or major.'”

For thousands of years, the traditional ethos of harmony has played an active role in the continuity and inheritance of the Chinese civilization, rooting the proverb “harmony is the most precious” in the minds of Chinese people for countless generations.

During his remarks at the opening ceremony of the eighth Nishan Forum, Wu Weihua, vice chairman of the Standing Committee of the National People’s Congress, said that the Confucian thoughts of harmony, including exchanges and dialogue, inclusiveness, and mutual learning, have provided enlightenment for exchanges and cooperation among different nationalities and civilizations.

Wu noted these thoughts also pointed to the fundamental ways to handle relations among countries, peoples, and civilizations.

Peace and development should come first, and humanity’s shared values should be promoted to build a community with a shared future for all, he added.

Over the three-day event featuring various sub-forums, participants acknowledged the contribution of excellent traditional Chinese culture to world civilizations, saying it is of great significance in tackling global challenges.

They agreed that the diversity of civilizations is the source of human progress. Civilizations keep flourishing through exchanges and mutual learning. In a world where countries are increasingly interdependent and share weal and woe, respecting diversity is key to cooperation and obtaining win-win outcomes.

“Civilizations are equal. There should be no discrimination, hostility, or conflict between different civilizations,” said Chen Lai, dean of the Academy of Chinese Learning at Tsinghua University in Beijing.

Countries should promote common values, such as peace, development, equity, justice, democracy, and freedom, on the premise of respecting diversity, added Chen.

The role of youth in seeking the harmonious coexistence of civilizations was also emphasized.

Zhao Kejin, deputy dean of the School of Social Sciences at Tsinghua University, said that with the rapid development of information technology, the younger generation should shoulder their responsibilities to practice and carry forward the concept of equality, mutual learning, dialogue, and inclusiveness, and strive to be a strong force in civilization exchanges.

In the opinion of Roger T. Ames, humanities chair professor from the Department of Philosophy at Peking University, the pressing issues such as global warming, environmental degradation and income inequalities, are themselves organically interrelated.

Traversing all national, ethnic and religious boundaries, these issues can only be addressed effectively by a global village working collaboratively for the good of the world community as a whole, said Ames. ■