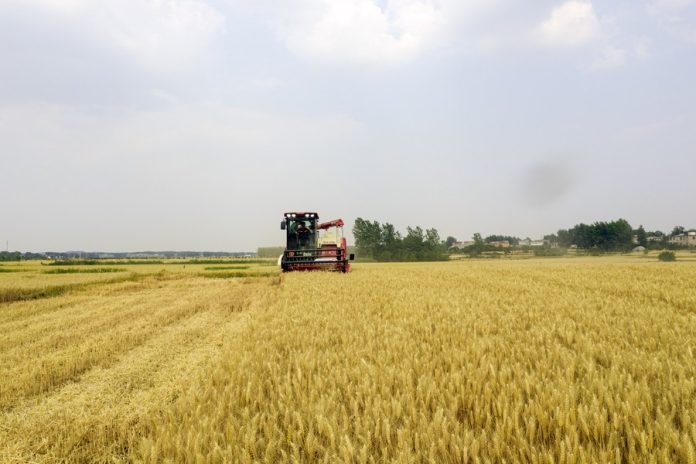 BEIJING, June 1 (Xinhua) — China is carrying out its summer harvest at full throttle in a bid to ensure adequate grain supply.

During a meeting last week, Chinese Premier Li Keqiang stressed that the summer harvest is of great significance to attaining the country’s annual grain production target. He urged the smooth logistics of agricultural equipment and personnel and called on governments at all levels to “waste no time and leave no single grain unharvested” during the harvesting season.

Traditionally, the summer harvest spans from May to late June in China every year, with most of the work focusing on reaping winter wheat, a staple grain crop, and oilseed rape. The grain output in the period takes up about a quarter of the annual total.

In keeping with the nation’s pledge to keep its 2022 grain output above 650 billion kg, the wheat harvest is proceeding smoothly across the country. As of May 28, the harvested area for winter wheat had exceeded 2.5 million hectares, with Sichuan and Hubei, two agricultural powerhouses, having completed the majority of their wheat harvest tasks.

The province of Henan is China’s largest wheat producer, accounting for nearly a quarter of the country’s total wheat yields and planting area.

However, due to the latest COVID-19 resurgences, tightened prevention measures impeded some rural migrant workers’ return to their farmlands in their hometowns.

In the face of such challenging circumstances, local governments have made multi-pronged efforts to facilitate summer harvest. Their measures include the formation of emergency crop-harvesting teams and the launch of a green channel through which highway inspections and COVID-19 screenings involving farm equipment transport are expedited.

Considering that this year’s total area of summer grain remains roughly flat compared with the 2021 level, the provincial authorities expect a bumper summer harvest despite the COVID-19 headwinds.

With Henan serving as an example, the country’s Ministry of Agriculture and Rural Affairs has urged local departments to better coordinate COVID-19 containment with summer harvest, and work concertedly with healthcare, transport and energy departments to unclog the logistics to ensure timely grain production.

While ramping up the monitoring and early warning of meteorological disasters, the ministry has also dispatched nine work teams to major wheat-producing provinces such as Henan, Anhui and Jiangsu to provide instructions.

In terms of policy incentives, the National Food and Strategic Reserves Administration recently said that it would raise the minimum purchase prices for rice and wheat in major grain-producing regions, amid efforts to safeguard farmers’ interests and stabilize the grain market.

Another case in point is the Agricultural Development Bank of China, a policy bank, announcing the loan issuance of 110 billion yuan (about 16.5 billion U.S. dollars) for the purchasers of summer grain. The bank said that the amount, if necessary, would be increased to ensure a “steady and orderly summer harvest.”

“Thanks to those new machines, we have harvested two-thirds of our crops in three days,” said Han Lei, a villager of Jiazhuang village in east China’s Anhui, pointing at four crop harvesters in the oilseed rape fields.

The upgraded crop harvesters reduce losses in the reaping process by half compared to conventional methods, Han told Xinhua.

Anhui has long been renowned for its rapeseed plantations. On mechanizing agriculture, the province’s agriculture authorities have said that some 200,000 units of combine harvesters are to be put into use this year, and the proportion of machine harvesting will remain at around 99 percent across the region.

“I have four drones and with their help, I completed spraying pesticide on my crops in eight hours last month,” Shang Yue, a wheat farmer in Anhui, told Xinhua, adding that UAVs play a crucial role in his crop management every day, including crop protection and pesticide spraying.

“Such comprehensive mechanization has boosted my confidence in crop production,” Shang said.

Research institutes, meanwhile, are seeking sci-tech breakthroughs to further beef up the country’s grain output. Last month, the Chinese Academy of Agricultural Sciences announced that it would launch a research and development campaign to help expand the yields of five staple grains — rice, wheat, corn, soybeans and potatoes.

The academy added that it will focus on selecting high-quality varieties, nurturing core technologies and promoting yield-increasing skills.

Chinese Ambassador to Cyprus Liu Yantao published an article on the...

The Cyprus India Cultural Association organised a celebration of the 75th...